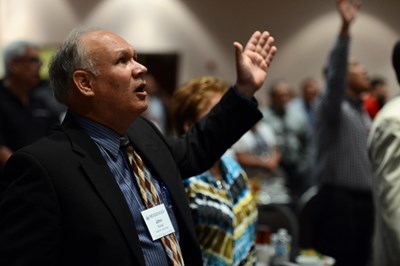 PHOENIX (BP) — Mobilization will be the focus of the Hispanic Advance Challenge — AVANCE 2017 — on Monday, June 12, prior to the Southern Baptist Convention’s annual meeting in Phoenix.

Presenting the evening’s challenge will be Edgar Aponte, International Mission Board vice president for mobilization. A three-member panel of church leaders seasoned in mobilization also will address Hispanic pastors and leaders at the 7 p.m. gathering in Room 106C of the Phoenix Convention Center.

The panel will discuss “how they have effectively mobilized everyday believers to reach our communities and the world,” said Bob Sena, Hispanic relations consultant with the SBC’s Executive Committee.

Also on June 12, the National Hispanic Fellowship of the SBC will hold a meeting to refocus as an organization, executive director Robert Lopez told Baptist Press. The fellowship’s meeting will be from 9-11 a.m. in a location to be announced.

AVANCE 2017 will mark Aponte’s first address to the annual Hispanic session. Prior to joining the IMB’s staff in 2016, the Dominican Republic native served as director of Hispanic leadership development and visiting professor of theology and Hispanic leadership at Southeastern Baptist Theological Seminary. Previously, Aponte was an embassy staff member in Washington, D.C., for his home country, coordinating relations with the U.S. Departments of State, Defense and Labor and with Congress.

Aponte holds a Ph.D. in theological studies from Southeastern and a master’s degree in Christian ministry from Southern Baptist Theological Seminary along with graduate degrees in corporate finance, business administration and management.

Featured in the panel on mobilization will be Fernando Mangieri, Ivan Ballines and Ivan Montenegro.

Mangieri is pastor of Iglesia Bautista Conexion in Chesterfied, Va., who has planted four churches in the state since 2009, including one in Richmond to reach the Mixtec people with ancestry in southern Mexico. The church is led by a Mixtec pastor who was a leader in Mangieri’s first church plant.

Ballines is a building contractor and member of Iglesia Bautista Emanuel in Aurora, Ill., who has led volunteer teams to reach South Asians in the Bronx and in Chicago and has partnered with the IMB to lead several pastors, including his own, on mission trips to South Asia, with one couple now serving there as part of the IMB’s Kairos program for Hispanic missionaries. Additionally, 10 churches in Illinois, Indiana, Virginia and Florida are now involved in outreach to the region.

Montenegro, pastor of Tabernáculo Bíblico Bautista in Lynden, Wash., and his wife have planted eight Hispanic and bilingual churches in the state since 2012 with support from the Northwest Baptist Convention and North American Mission Board. Montenegro also leads a Bible training center for a new generation of pastors and leaders from the U.S. and Canada. Tabernáculo Bíblico Bautista has been sending and supporting missionaries to Mexico, Central America, Uruguay and Canada.

AVANCE, as described by Sena, “provides a platform, experience and opportunity for pastors and leaders from different areas of the United States to connect, network and share effective ministry strategies.”

The gathering highlights “the contribution that the Hispanic church leadership and membership are making to the Southern Baptist Convention,” Sena said, and it models “a spirit of unity and mission” among Hispanic leaders in the SBC and state conventions toward “a unique opportunity to cast a vision and challenge for local and global missions to the Hispanic familia.”

Additionally, Sena said, the various recognitions accorded during AVANCE to small and large churches for their Cooperative Program giving and their involvement in mission activities “have served as a inspiration, motivation and mobilization to greater ministry.”

AVANCE 2017 was moved to Monday (June 12) in order to support the Harvest Crusade on Sunday, June 11, which is this year’s primary element of the Crossover evangelism initiative prior to each year’s SBC annual meeting. The Harvest Crusade will be led by California pastor-evangelist Greg Laurie at the University of Phoenix Stadium.

Hispanic pastors and leaders can register for a 5 p.m. dinner June 12 sponsored by the International Mission Board, with details to be posted at imb.org. An ice cream social will follow the AVANCE gathering.

Lopez, of the National Hispanic Fellowship, said the organization is “presently seeking to reinvent itself in order to more effectively serve and minister to the changing Southern Baptist Hispanic community.”

The fellowship was formed in 1995 as part of the language missions work of the SBC’s former Home Mission Board as “a platform to convene Hispanic pastors at major SBC events for fellowship and to inform them about Spanish-language resources. In addition, it provided a venue for networking,” said Lopez, lead pastor of Centro Christiano Vida in Ocala, Fla.

“2017 is a year of refocusing and strategies to gain ground that we have lost in recent years,” Lopez said, “and set new goals that will lead us to unity and the development of effective plans to reach the Hispanic community for Christ.”

Information about the fellowship can be accessed at https://www.facebook.com/ConfraternidadNacionalBautista.