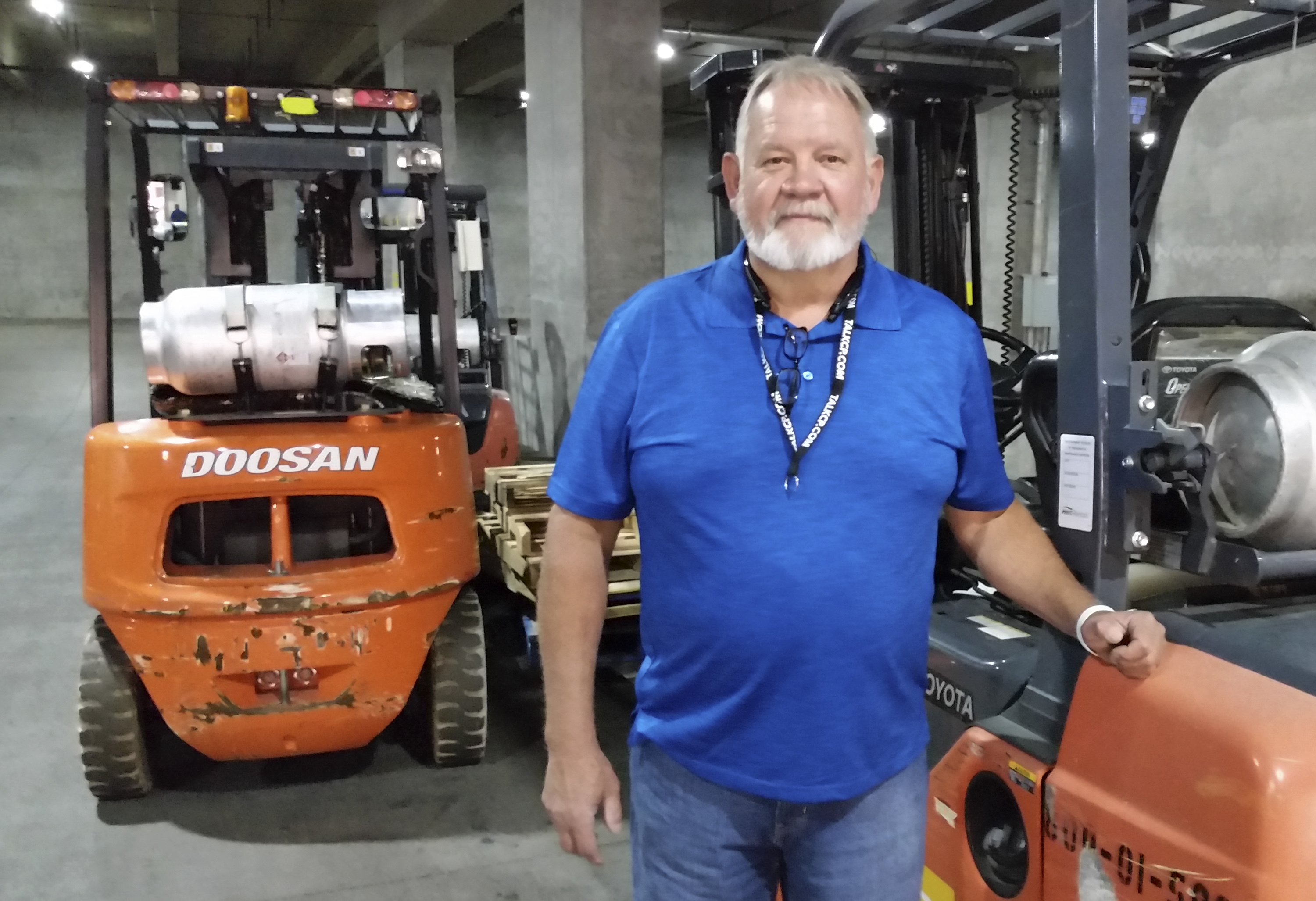 At the loading docks, Phil Baker brings the Word

PHOENIX (BP) — Just to the right of a heart defibrillator and fire extinguisher, Phil Baker has set up a plastic-top folding table in the cavernous loading dock at the Phoenix Convention Center.

Baker has placed a plastic box there labeled “Prayer Requests,” along with a supply of blank index cards and pencils and a couple dozen devotional booklets.

Another small stack of cards explains what Baker, the building superintendent at the Southern Baptist Convention building back in Nashville, is up to in Phoenix and every other city where the SBC holds its annual meetings.

“Thank you for sharing your prayer requests with us,” the dock workers are told, along with word that they’re being prayed for “that God would give you comfort, strength and peace.”

“We would love to share with you about how you can have a personal relationship and deeper walk with Jesus. Look for anyone wearing an SBC Staff badge, they would be happy to talk and pray with you.”

The card’s third paragraph is simply John 3:16: “For God so loved the world that He gave His only Son, that whoever believes in Him should not perish but have everlasting life.”

Baker’s work on the dock, however, encompasses more than prayer.

Dock superintendents have been gracious to let him bring several dozen donuts and then speak a few minutes before their “call to work” and safety reminders at 7 or 8 a.m.

depending on the city.

“God gives me what to say,” Baker reflects on the mini-devotionals from Wednesday through Saturdays before the noise erupts from 40-50 dock workers unloading pallets, crates and boxes from tractor-trailer rigs onto fork lifts to deliver into the exhibit hall through a 20-by-18-foot passageway.

“I’ve never had a lack of anything to say about Jesus,” Baker recounts.

And he invites the workers to a Bible study on Sunday morning, a half-hour before their start time. “Most of the folks are unchurched,” he says. “Their work is on Sundays a lot of times.” Yet few attend the Bible study since they typically arrive just in time to begin work.

The Sunday attendance has ranged from one to four, except for the 2007 SBC annual meeting in San Antonio when seven attended, including a dock supervisor who had been diagnosed with cancer a few weeks earlier.

As Baker labors alongside a dock worker during the convention set-up, he tells the individual “who my hero is. It seems to be the shortest and most direct way to get their attention.”

And he then likes to cite the Golden Rule, “to treat people the way they want to be treated” to note that “we’re going to be different. And if we’re not, you let me know.

Baker first began the loading dock outreach at the 2005 SBC annual meeting in Nashville with guidance from a convention decorating company rep.

“I continually noticed there was something missing on the dock,” he says. “It’s easy to just say, ‘How are you doing today? We’re praying for you.’ What I felt a burden for was to speak to them about what I believe.”

To the dock workers, it’s just another “show,” as they call each incoming convention, until Baker’s demeanor begins to take root. “Opportunities,” he says, “are always there.”

Baker, who has directed the SBC Building’s maintenance since 1999, also is has been the construction coordinator for the World Changers initiative the past two years in mid-July in Nashville, encompassing about 150 teens from across the country.

As to the prayer requests, Baker takes them to the convention office staffed by the SBC Executive Committee.

“Please take time to pray for these requests received from convention dock workers,” a notice says atop a tray with a handful of yearnings.

— “Pray for my niece who is on drugs, that she may be clean from them to get her kids back, and pray for her husband to stop the abuse he does to her.”

— “I’m looking for guidance, as I try to move into a new line of work. I want to help others more. It doesn’t have to pay as good…. I have a family to support…. Much love and appreciation. Please also … pray for our neighbors. The mother was killed in an accident. She leaves behind a husband and 4 young children.”

-– “First, thanks so much 4 taking the time & caring enough/at all to pray 4 a stranger…. Prayer requests: For my friend Donald that the Lord may show Himself in an undeniable way & deliver him from the alcoholism & hurt that’s slowly killing him. Also, that Donald’s dad come 2 know the Lord b4 he passes because he’s getting way up there in age.”

— “Please pray for my wife. She travels constantly to dangerous areas.”