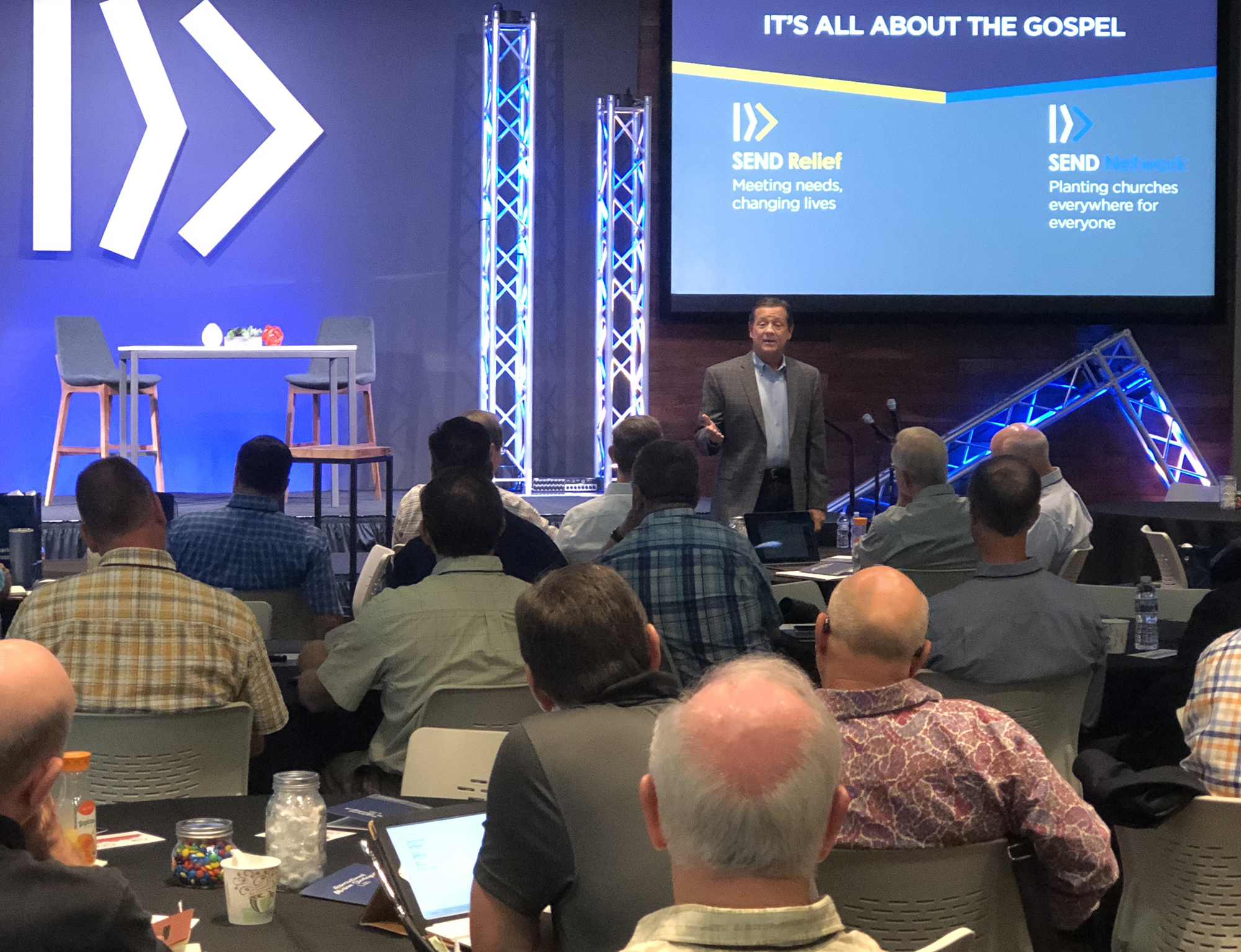 ALPHARETTA, Ga. (BP) — Nearly 200 associational mission strategists (AMS) from across North America gathered at the North American Mission Board in Alpharetta, Ga. Over the last few years, the Southern Baptist Conference of Associational Leaders (SBCAL) has been sharpening its approach to better equip mission strategists. One aspect has been a renewed vision for the annual AMS lab hosted by NAMB.

The lab is centered on core principles that the SBCAL has focused on in light of a study team report the entity adopted in 2018. The report was designed to heighten the effectiveness of associations across the Southern Baptist Convention.

The event provided an opportunity for the associational leaders to connect with one another, hear from NAMB leadership and receive encouragement and training.

“We are so grateful for what you do. If you are an AMS here today, you are our honored guest, thank you for what you do,” Steve Bass, assistant to the president for convention and associational relations at NAMB, said as he welcomed participants to the event.

Iorg encouraged strategists to remember their “audience of one” and not fear the opinions of people over God’s view of their service.

He also charged the leaders to focus on faithfulness to their calling, not just enduring in their role. To be good stewards of the Gospel, Iorg said, Christian leaders must aspire to bear fruit with the giftings given them by God.

“Servant leadership is using our roles to benefit others,” Iorg told the audience.

In his second message, Iorg pointed to the missionaries in Antioch in Acts 11:20 who seized the opportunity to do something that had not been attempted — establishing a movement to reach Gentiles with the Gospel.

“You have the opportunity to speak for, facilitate and promote innovation where you are,” Iorg told the mission strategists. “You have the capacity to say, ‘Let’s do something that’s never been done before.'”

Throughout the rest of the lab, associational leaders learned more about foundational competencies for Christian leadership, such as spiritual maturity, calling, leadership and character during the breakout sessions.

Ezell provided attendees with an overview of NAMB’s current work and priorities. In a smaller side meeting, Ezell met with leaders within the group to discuss ways NAMB and associations can strengthen their partnership.

“They listened to our ideas and concerns and expressed a desire to become a go-to resource for associations seeking to impact their community for Christ,” Rick Wheeler said of the meeting. Wheeler serves as lead missional strategist with the Jacksonville Baptist Association in Florida.

“I look forward to seeing how we can better serve churches together by leveraging the resources and expertise of NAMB with the proximity and relationships that local associations have with their member churches,” he said.

Donnie Simpson, who serves as executive director of missions for the Kansas City Kansas Baptist Association, echoed Wheeler’s positive comments about the meeting.

“We talked a lot about improving communication between NAMB and associations,” Simpson said. “A lot of it was about getting associations back at the table in the process of reaching our metro areas.”

Simpson currently leads AIM — Associations In Megacities, a loose affiliation of associational leaders who serve in cities with 1 million or more in metro area populations.

“I’m glad we had the opportunity to discuss ways we can work more closely,” Ezell said. “There are 1,200 associations. Not all are strong, but many of them are. Just as I would hope someone wouldn’t judge NAMB based only on one bad experience, I would ask people not to judge associations that way.”

NAMB is currently helping the SBCAL publish a new book which explores the foundational, relational and strategic proficiencies for effective associational leaders.

Hunt thanked associational leaders for their help in encouraging churches to participate in the new “Who’s Your One?” personal evangelism initiative and the ongoing Who’s Your One Tour. He asked for their continued support.

“God’s giving momentum, He really is,” Hunt said. “So, we want to ride that tide.”