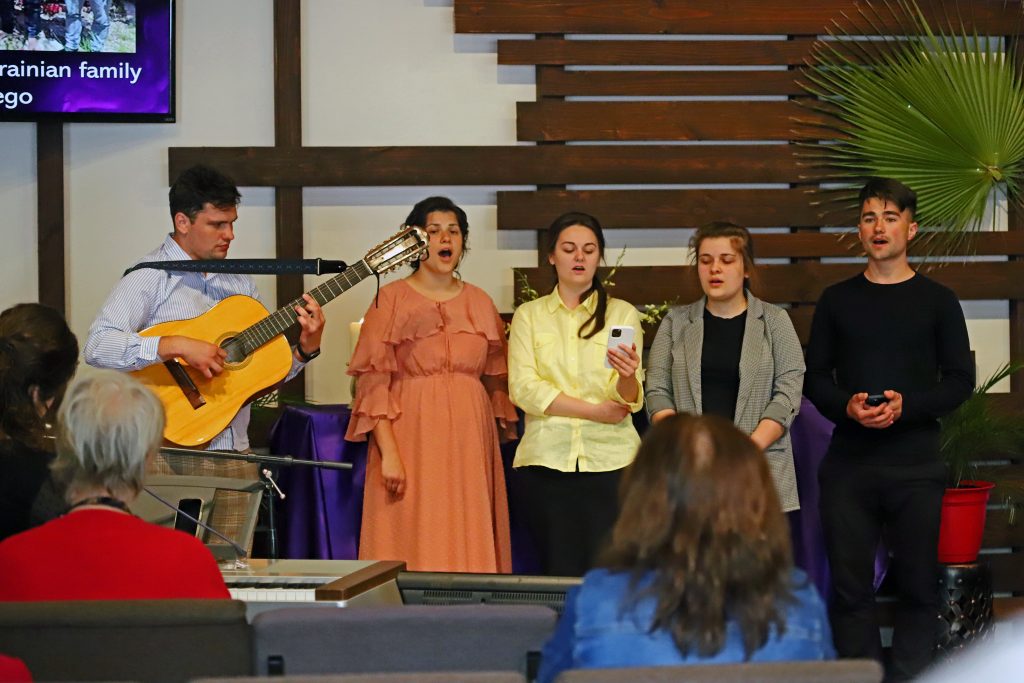 SAN DIEGO—Yelena and her childhood friend in the Ukraine, Olena, had not seen one another for almost 30 years, but neither ever imagined a war between their homeland and Russia would be the catalyst for their reunion.

In many instances those escaping from Ukraine are leaving not only possessions but family. The refugee family left their 19-year-old son behind because Ukraine is requiring men to stay in the country and either join the fight or be conscripted. Because the family had three children under the age of 18, the family, including Olena’s husband, were allowed to leave.

This is one of thousands of stories being played out in California’s backyard – Tijuana, a major entry point into the United States for Ukrainian refugees. On both sides of the border, California Southern Baptists are ministering to some of the 100,000 refugees the United States will allow to immigrate because of the conflict.

Although Juvenal Gonzalez, a missionary with San Diego Southern Baptist Association, has been ministering in Tijuana for weeks, the needs are overwhelming and plans are being made by the association, in partnership with a coalition of other Southern Baptist entities, to minister to the refugees, on both sides of the California/Mexico border.

“These people come here with nothing,” Mike Carlisle, director of missions for SDSBA, said.

He noted that like Olena and her family who have settled in Sacramento, refugees leave all possessions behind and spend their life savings to get here with only the clothes on their backs.

Gonzalez said all refugees entering the United States through Tijuana are sheltered at El Deportivo, a large indoor and outdoor sports complex. His primary mission is to feed refugees at least one meal, preferably breakfast, daily.

Gonzalez “empathizes” with those to whom he ministers because he once was an immigrant himself. “When I look at them not knowing how to speak English, and having no job or possessions, I see myself. I was one of them.”

Gonzalez said the refugees need to be fed and need someone who speaks their language “to help them through the process and to give them hope by telling them that everything is going to be okay.”

After serving a group of older teenage boys breakfast, Gonzalez noticed they were taking pictures of their food. When asked why they did that, the boys said they were sending the pictures to their relatives “so they would know we are okay.”

“This,” Gonzalez exclaimed, “is providing help in Jesus’ name.”

He noted that an average of 800 refugee families are processed through Tijuana each day and about that same number arrive daily to begin the entry process. “It’s been a continual flow in and out for the past three weeks,” he said. “And, we don’t see any end in sight.”

Gonzalez and others, like Carlisle, say this is not a short-term ministry, but one that will last a long time, possibly until at least the end of 2022.

But the ministry needs don’t stop in Mexico. Once refugees are processed and released onto American soil, they need somewhere to stay before moving to their destination.

Carlisle said San Diego is a “stopping off point” for most of those entering the country from Ukraine.

“Many of the families have contacts throughout the nation and are then waiting for airline tickets to make it to their destination for settlement. In the meantime, we can help by providing housing, food, transportation and translation,” he said.

Carlisle is attempting to set up a system where churches in the San Diego area would work as “hubs” to help those crossing the border. He is working with California Southern Baptist Convention Disaster Relief Coordinator Mike Bivins to use DR “crisis” gifts to streamline the process.

“We are shooting from the hip because we’ve never done this before,” Carlisle said. “However, we (Southern Baptists and those in San Diego in particular) need to step in and do what we can. I’m confident God is in this, and that Southern Baptists will step up and help these people in their suffering.”

One of those Southern Baptist entities stepping up, according to Carlisle. is Send Relief of the North American Mission Board, which dedicated five pallets, or approximately 250, refugee backpacks for the intake center in Tijuana.

In the meantime, Bivins, also is providing two shower units since many of those who cross the border will be housed in churches which can accommodate most needs, but may not have showers available. He said other DR equipment (mobile kitchens) also is being deployed to help in the situation.

Since March 21, Bivins noted that CSBC Disaster Relief has sent members on two teams to Eastern Europe to minister on the Romanian side of the Ukrainian border. On April 13, a six-member team will depart for Bucharest to assist a group of nine churches that have opened their doors to many refugees attempting to get international flights.

In San Diego, Bivins said DR’s strength may be in setting up an incident management team for the association to help “organize the process.” He added, “This certainly will unfold as we look at churches and their capabilities.”

CSBC DR will work with the association to “provide help, hope and healing in this crisis situation,” Bivins said. “Even though this is not a natural disaster, it is a crisis on steroids because these families have experienced unheard of trauma.

“What these refugees are experiencing, “ Bivins believes, “is worse than your house burning to the ground. These people have walked away from everything they’ve owned and known, and they are not going back.”

He added it is “up to us to walk alongside them and provide some comfort, help and hope because we are mandated by Christ to do that.”

One of the ways Bivins believes this can be accomplished is through chaplaincy. He noted female chaplains are desperately needed for this crisis.

Bogdan Kipko, pastor of Forward Church in Irvine who is of Russian descent and immigrated to the United States, agrees with Bivins and adds that this is an evangelistic opportunity for California Southern Baptists. “The evangelism opportunities are off the charts,” he noted, “with probably 70 percent of those coming through who are non believers.”

Kipko noted that Christians are called to care for widows and orphans. “Wherever there is pain, believers should be the hands and feet of Jesus.

On Palm Sunday, Kipko and his wife went to Tijuana to help translate and minister in whatever way possible. He had the opportunity to preach. He said he began his sermon with a traditional Ukrainian Christian opening by saying ‘Jesus Christ is Risen.’ The overwhelming response from the crowd was, ‘He has risen indeed.’”

Kipko and his wife prayed with a couple who were called up to go through the process. “We received a text at 3:30 in the morning that they had made it through and were in the United States.”

What’s next for ministry along the border?

The story of making it out of Ukraine, from Europe, to Mexico and into the United States can be told about 800 times a day, but Carlisle believes California Southern Baptists can make that transition easier and provide practical help and spiritual guidance along the way.

He noted volunteers are needed on both sides of the border to prepare meals, clean up, provide transportation and to minister as chaplains. He added that funds and translators also are needed.

“We are working through setting up the logistics and process right now as to how this will work, “Carlisle said, and noted that it would be after Easter (April 17) before it could be operational.

Carlisle noted that Southern Baptists will want to jump in and help immediately. However, he asks them to “pray for refugee crisis along the border” while giving the association time to “structure the process that will work best for the association and those who want to volunteer.”

(As for Yelena and Olena, Yelena’s family is housing Olena’s family in Sacramento as the refugee family attempts to settle into a new way of life. Their story will be told in a separate article scheduled for release the week of April 18.)