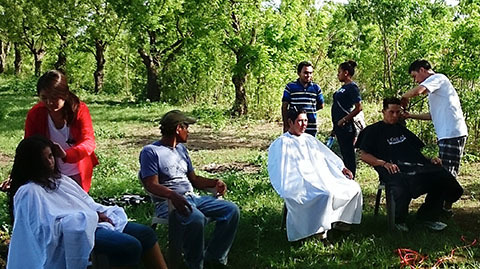 “Advancing the Kingdom” through church planting

Church planters are usually gregarious entrepreneurs who start something from nothing. And for those God-called to a new area where they know no one, faced with months of disinterest before connecting with a “potential,” life can be hard.

Proud knows, because he’s watched 17 of those 140 churches since they were birthed in 2015. Nine of them worship in Spanish and eight worship in one of the other 11 languages of Orange County’s Southern Baptist churches.

The association in 2012 developed a strategy to support church planters and at the same time strengthen relationships within the association.

“We recognized there were ‘parachute’ church plants, with sponsors not coming from Orange County, and they were having a hard time,” Proud said. “We saw how important it was to have a support system.”

The association developed a Church Planting Mission Council (CPMC), which pairs each church planter with three pastors from the association for support, encouragement and mentoring.

“The ideal is that one (member of the team) is a church planting ‘mentor,’ who has been on a similar path; and if we have a church locally that is a sponsoring church, that senior pastor; and another senior pastor who has a passion for helping other ministries,” Proud explained.

“We bring the three pastors together for an orientation, so they know how this is supposed to work,” he continued. “We don’t manipulate the process. They make the decisions. They have the freedom to support the church planter how they choose, to pray for him, help him, get their members involved with him, but also help him think through things down the road: mission, vision, values, assimilation, discipleship, missions, ministries and more — all those things the planter might want to integrate into the church start.”

The CPMC process is a win-win because the church planter gets support he might not have had otherwise, and he gets connected with three other pastors in the association, so he doesn’t feel so alone.

“And there’s a multiplicity of values in this for our association,” Proud said. “We get to see four pastors growing in relationship. They meet once a month for three years.

“We ask the planter to commit to becoming a church planting mentor. We get to see the value of partnering, replicating the process, and see more planters engaged.

“What we’ve found is that the financial need is very important, but of greater value to the planter is the partnership with other pastors,” Proud noted.

The strategy isn’t as easy as it might sound, he pointed out — people from 51 nationalities live in Orange County.

“On any given weekend, we have almost two-thirds of our churches worshiping in a language other than English. So not only do we have the challenge of finding three pastors, but many of them don’t speak English.

“And language isn’t the only barrier,” Proud continued. “Asian cultures are very different in their thought processes than Hispanics, and even among those who speak Spanish there are varying cultures.

“These pastors need to have compatible mental models as well as the ability to communicate with each other,” Proud said. “On the other hand, we want to make sure we’re stretching our pastors to be able to do ministry together even if they’re different in their thought processes.

“If we as an association are going to do ministry together, we need to spend time together.”

Churches plant churches, Proud noted, and the association has limited its participation to resourcing “churches advancing the Kingdom together.”

“The Lord has charged the church to make disciples,” Proud said. “The sower sows the seeds and when the time is right, a harvest happens. It’s a partnership. God always does His part. Are we going to be faithful and go out and plant seed?

“The reason for planting churches is that you have the opportunity with each new plant to reach another base of people,” Proud continued. “We have 3.2 million people in Orange County, and every different church plant provides a platform to reach more people for Christ. The more churches we have, the greater the opportunity we have to penetrate lostness in our county.”