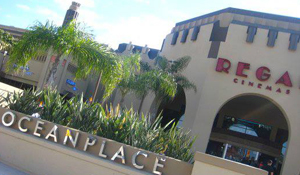 It’s the first in an anticipated series of a dozen or more churches to be planted in Oceanside by New Song Community Church, where Hal Seed is pastor.

But this story is about Wes Coddington and how God has grown New Song Seaside since its first service last October.

He said he’s learned this since moving from Philadelphia to Carlsbad in 2012. In Philadelphia, Coddington worked for a company that specialized in leadership development, and he ministered at a church he’d helped rebirth.

“We sold or gave away about everything we had,” the church planter said, speaking about his wife Karen and three children. “We brought very little and came across the country in July 2012. We miraculously found a place to rent, started attending New Song and got involved. I had free time so I used much of it to help out.”

Coddington earned a living as a contractor with TAI, Inc., the company he had worked for in Philadelphia, developing relationships that would lead to him doing leadership, team-building and strategic planning seminars.

“I was in a small group with Hal (Seed). At one point Hal said, ‘I think you’re our next campus pastor,'” Coddington recalled.

Having in the past been in pastoral roles, Coddington knew long-term pastoring wasn’t his gifting, but after praying about it, he saw God leading him to start New Song Seaside, on the west side of the city of about 180,000.

“We looked for rental properties for the church at schools; we just looked at a lot of places,” Coddington said. “We learned the Regal (theatre chain) has a national program of letting churches rent their facilities. It’s a little more expensive, but it’s a great location – a block from the beach – and it’s familiar to the community”

Services today average 120 or so. An additional theatre is used for children’s ministries; the church nursery is in the thea-tre’s “party room.” Total cost: about $1,000 a week.

The 9:30 a.m. Sunday service was designed around the beach crowd: after sunrise for early-morning folks, and before lunch for those who want to hit the beach before noon.

Worship is “fairly typical but very casual,” Coddington said. The worship band, which uses a rhythm-and-blues sound, is very talented and led by a bivocational leader, Dave Workman. The theatre-size screen is used to advantage, with one or two short videos each week. Theatre seating – with cup-holders – adds to the comfortable feeling, and the congregation appreciates each service’s three-minute intermission so people can greet each other and get drink refills from the church or, if they prefer, from the concession stand when it is open.

“In our first 13 weeks we averaged 10 first-time guests each week,” Coddington said. “People are coming to check out church in a theatre.

“In Southern California people are very open to being asked to church; they’re just doing their thing, and not thinking about it until they’re asked,” he added. “People are open, especially when we’re in that movie theatre venue. It gives us a lot of opportunities.”

Between two and four people on Sundays, Thursdays and Saturdays stand in front of the theatre, situated in downtown Oceanside near several eateries. Their purpose: to invite people to church.

“One couple came this past Sunday,” Coddington wrote in a recent e-mail to Randy McWhorter, leader of the California Southern Baptist Convention healthy church group. “It was his first time in church; she had grown up in the Catholic church but left it many years ago.

“They woke up Sunday and said, ‘We should go to a church today.’ … They began walking in one direction and turned around,” Coddington wrote. “She told me at lunch that, ‘I felt something inside me telling me to turn around and go the other way.’ When they did, they found the theatre and were invited in by someone on our team. … They said they will be back next week and are joining a small group this week!”

In the service each Sunday, New Song announces the designated restaurant for an after-church lunch; it pays for the meal for all first-time visitors.

“If a person visits one time, church growth statistics show that about 11 percent will come back,” Coddington explained. “If they come back a second week, that bumps to 80 percent they’ll be back. When they get connected right after the service, with a free meal and warm, friendly conversation, they feel welcomed and included. “

In addition to greeters outside the theatre inviting people in, marketing includes commercials about New Song Seaside seen each week by movie-goers, at a cost of about $2,000 for production and approximately $5,000 for airing during a 13-16 week period.

Coddington contracted with Tory Nelson of Los Angeles for the commercials’ production.

“Tory is incredibly talented, having done commercials for Walmart, Dove and Doritos,” Coddington said. “He attends Mosaic – an SBC church – and is available to churches/organizations for any video needs they may have.” (Nelson’s work – including a New Song Seaside commercial – and contact information can be found at www.vimeo.com/torynelson.)

Discipleship takes place in small groups throughout the week.

“We’re growing slowly; the Lord is drawing people to Himself,” Coddington said. “Ultimately God is doing it all, but He’s got us a good place and given us a great team with which to work.”