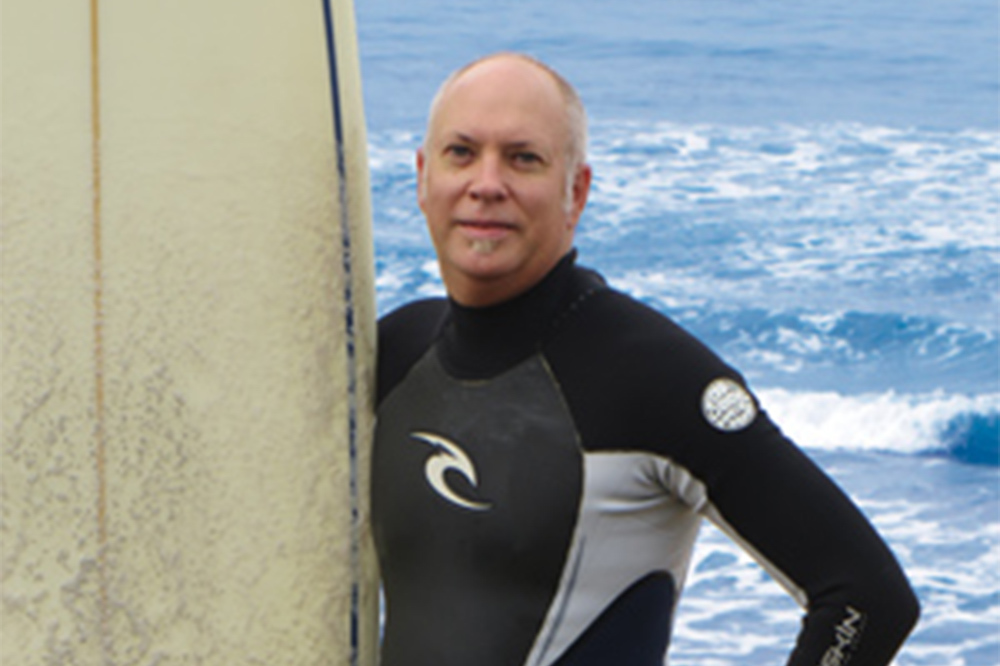 A new wave of ministry opportunities rolls into Vista

VISTA – Times have changed and how churches connect with others also has changed.

But sitting on a surfboard was the last place Pastor Robert Hatch thought he would be sharing biblical counsel to the younger generation. In his 20 years of ministry, Hatch, pastor of Stonebrooke Church in Vista, has seen multi-media PowerPoint presentations replace overhead projectors, and electric guitars outnumber pipe organs – but one thing will always remain the same: the power of the gospel.

“A few years ago, one of the Marine gunnery sergeants from the nearby base brought some of his Marine friends with him to the beach where a few of us from our church met to surf,” Hatch recalled.

“When you’re waiting for a wave, there is plenty of time to sit and talk over things. One time he brought a young staff sergeant who told me his girlfriend was pregnant. I asked them why they weren’t married since both professed to be Christians.”

Hatch counseled the soon-to-be father on the importance of doing what was right before the Lord, and told the young Marine he was willing to do the wedding ceremony.

“That week I received a call to see if I was available to do the wedding on Sunday afternoon,” Hatch remembered.

Reaching out to those who are stationed nearby didn’t end with that day on the beach. Week after week the gunnery sergeant continued to bring young Marines to the beach on Saturday mornings where the group of surfing enthusiasts gathered.

“I realized that this was more than just having fun,” Hatch said. “It was a unique ministry opportunity.”

But hitting the waves isn’t something Hatch, from Orange County, had grown up with.

“I was never much of a swimmer. In fact, I would avoid it even if we were at the beach,” he explained. “It wasn’t until a few years ago I had even attempted to surf. There was a woman in our congregation in her mid-50’s who was in the water every morning before she taught school. She was willing to give me a few surfing lessons, so I decided to give it a try.”

After attempting it, Hatch found out there were other men in his congregation who enjoyed surfing. Before long, they were getting together every Saturday morning.

While learning to surf was something new for Hatch, being involved with church was part of his life for as long as he can remember.

“My parents were the primary influence upon my life. My dad was a pastor of a small Baptist church and both of my parents loved people. They would go anywhere and do anything to help others. I was able to see firsthand what it took to reach the lost and what happens when Jesus comes into the hearts of broken people.

“Dad passed away in 1986 when I was only 19 and God used that traumatic event to call me into full-time ministry,” Hatch said.

After graduating with a master’s degree from Liberty Baptist Theological Seminary in Lynchburg, VA, he took a youth pastor position in Orange County before making a move to Tracy. There, for the next eight years, he served as a youth pastor.

“I would say that Dr. Jack Jones, the senior pastor at Southwinds Church of Tracy, also had a huge impact upon my life,” said Hatch, who moved to Vista in 2006 with his wife, Cynthia, and daughters, Brittany and Taylor. “To this day, I still consider him my mentor in the ministry.”

Many churches are dealing with trying to find the delicate balance between preserving traditions of past generations, and being relevant to cultural influences on the younger generation.

“I think we need to try new ways to reach today’s culture,” Hatch asserted. “My methodology constantly changes, but my theology stays the same.”

It is staying grounded on foundational biblical truths that’s making a difference, not only in the community, but also across the globe, Hatch noted.

Recently he received an e-mail from the gunnery sergeant, now deployed, who brought his young Marines to the beach.

It read: “Hey, wanted to tell you this. I had mentioned to my Marines that we could do a small group a couple nights a week. I didn’t want to push it and I didn’t hear anything for a couple days. Then over a week ago I was talking to God asking Him to show me the path and I’ll do it.

“No kidding, minutes later one of my guys knocked on my door and asked if we could get together and we did. The next day 10 of my guys showed up! I’m using an NIV men’s devotional. Since the start of our group, two of my boys have been baptized.

“Thanks for all of your guidance and spiritual leadership. I learned so much in my short time with you.”

While not everyone lives close enough to grab a surfboard and head to the beach, there are always plenty of opportunities to creatively impact someone for Christ.

As Hatch knows, the next open door might be as close as the next perfect wave.