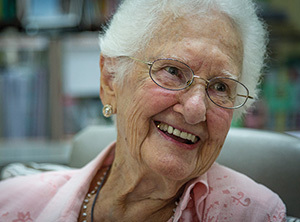 94-year-old continues to share the Good News — in Thailand

BANGKOK — “This is Jay,” Lorena Mayhugh said as she introduced the Thai-Chinese man next to her to a colleague at the Baptist Student Center in Bangkok, Thailand. “He’s Dr. Jay now,” she added with a big smile.

A few minutes later another colleague walked by and the 94-year-old English teacher quickly asked if he’d met her former student.

Lorena Mayhugh has invested in the lives of thousands of students during her 10 years as a volunteer English teacher at the Baptist Student Center. Jay Juntasa*, however, has become like a grandson to her, and she like a grandmother to him.

Like any grandma, she’s a proud one. She can’t keep the smile away when Jay talks about the business he started making facial and skin creams.

“He’s trying to get rid of my wrinkles,” she joked.

Lorena, a public school teacher in California for more than 30 years, is a sharp-thinking storyteller who tosses out funny quips with ease and loves sharing personal anecdotes. She’s even a pretty good “encourager” of sorts.

To persuade Jay to learn to play the guitar for worship during the small group Bible study she had encouraged him to start, she made a deal: if he learned to play, she would read his doctoral dissertation.

She read it, all 100 pages, with the help of a magnifying glass.

Most Sundays after church Lorena goes to lunch with Jay and his mom — her Thai family, she calls them — at a Chinese restaurant.

“She sacrifices her time,” Jay said. “She taught me to rely on God and she guides me.”

Lorena met Jay several years ago in one of her classes at the Baptist Student Center. From university students to government officials to senior adults, anyone can enroll in the classes.

Lorena casts her net even wider at “conversation corners” once or twice a week. Fighting off mosquitoes and enduring brutally hot evening temperatures, she sits at a table outside the center and waits for students. They can drop in any time during a three-hour period for casual conversation practice.

“You can stay awhile,” she said to a middle-aged woman and pointed to an empty chair next to her. The woman sat and Lorena continued conversation corner by telling how God created the world.

The students practice new vocabulary from the story, and, to help with their listening skills, Lorena asks questions about the story.

On that night she also told the story of Moses, which several students heard for the first time. Most of her students are not Christians. For Lorena, telling Bible stories is not only a good way to help them practice English — it’s an open door to the gospel.

“The Bible is about people. They make mistakes. But they turn to God and ask for forgiveness,” Lorena told her students after she finished the Moses story.

Bible stories aren’t the only way Lorena gets to the gospel. She’s a natural at weaving stories from decades of life experience into her English lessons.

She tells stories to show how God has provided.

She tells how God provided for her family during the Great Depression and how they were able to send milk and chickens home with the pastors who traveled through town. As a young girl, Lorena was drawn to the pastors’ late-night stories; she was already a storyteller in the making.

“I would sit up and listen to these pastors talk to my dad as long as I could keep my eyes open,” she remembered with fondness.

Students like Keng Meesang*, who call the 8 million-plus city of Bangkok home, are especially partial to the Missouri native’s narratives about growing up on a farm.

Keng’s favorite Lorena stories are the ones about milking cows, raising chickens and picking wildflowers in the forest on the way into town.

Keng, who now teaches English classes of his own at the Baptist Student Center, learned a lot from Lorena about being a teacher.

“I am learning from my students,” he said. “Teaching is learning.”

“He is right on that,” Lorena chimed in.

She delights in answering questions from students, especially the ever-popular and expected inquiry about her age.

Not far behind is this question: why would she leave her son, a marine biologist who likes taking his mom whale watching on his boat, and her grandchildren in California to live in Thailand?

Lorena tells them she’s a Christian, and God told her to come to Thailand.

About a year and a half ago she packed up her dorm-sized apartment on the center’s campus and headed home to California, thinking it was finally time to be with family and friends.

It didn’t take long to realize she was already home in Thailand. She returned to her classroom ministry of loving Thai people and sharing the gospel.

Although some wonder how Lorena still does ministry at her age, slowing down was never really an option.

“I’d be bored,” she said without hesitation.

Lorena can no longer drive a car, but in Bangkok she gets around just fine using taxis and the Skytrain, an elevated rapid transit system reached by stairway.

“That’s 66,” she declared triumphantly and stepped up on the last step to the Skytrain platform. With her cane to assist a hip that’s been replaced and sunglasses to protect eyes that have endured multiple cataract surgeries, she’d do several more 40-step sets before exiting the Skytrain and arriving home.

“She’s so stubborn,” Jay teased about his former teacher’s never-ending drive to remain a woman on the go.

Even during a vacation with Jay and his mother to China, Lorena insisted — much to Jay’s consternation — on climbing the steps at the Great Wall.

While she may have a stubborn streak and a desire to be independent, something more keeps Lorena going — a fortitude grounded in her relationship with Jesus and her passion for others to know God.

“You can do a lot in a classroom just teaching English,” she asserted. “Students know if you really like them. They see if a person is kind. And that goes a long way.”

For Lorena, that classroom kindness has turned into opportunities to speak about God’s love and salvation through Jesus.

For this volunteer teacher, these opportunities are evidence that age means nothing for someone willing to simply go and obey.

(Are you retired and ready? Want to volunteer in a strategic role by training leaders in Southeast Asia? E-mail seapconnecting@imb.org. *Name changed for security)