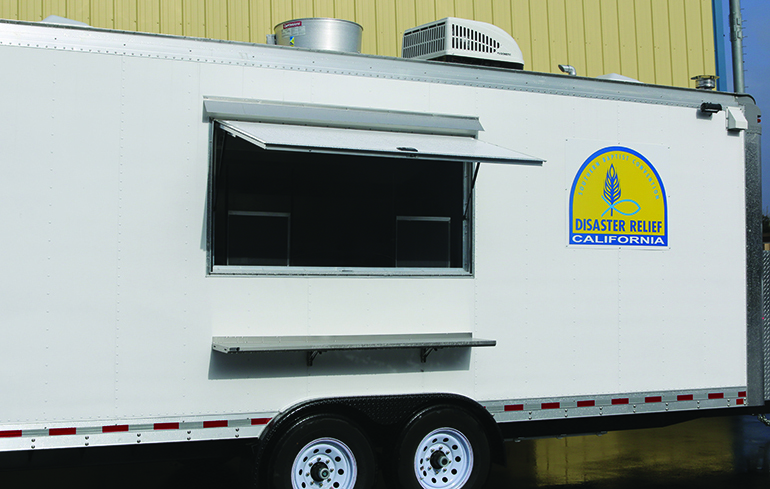 Petaluma Valley’s pastor Alan Cross, along with other congregation leaders, had established relationships previously with Petaluma emergency management officials and expressed a desire to help should disaster strike. That background work led to Cross’s receiving a 5:30 a.m. phone call one Sunday from the Petaluma Emergency Operation Center.

They needed a shelter for evacuees. Cross immediately agreed to help, and the church ended up sheltering approximately 150 people per day in its facility for four days, Baptist Press reported. At least 17 of those made first-time professions of faith in Christ.

“That kind of thing is the future of our ministry,” said Mike Bivins, California Southern Baptist Convention Disaster Relief director. He calls advance preparation like that done by Petaluma Valley “9/10 work,” referencing the type of effort that was needed on Sept. 10, 2001, to be in position for disaster relief following the terror attacks of Sept. 11.

CSBC has been emphasizing 9/10 work as a major focus of its DR ministry, hoping to increase opportunities for disaster response and gospel witness. Bivins led a seminar on 9/10 work in conjunction with last year’s CSBC annual meeting, and he anticipates even greater emphasis on the concept in 2020.

The basic strategy of 9/10 work is for each church to contact local officials about becoming part of the community disaster plan. If a disaster strikes, the church can jump into action immediately, ministering to its community. The Convention can “extend and expand” that church’s efforts, Bivins noted, by bringing in Disaster Relief equipment like feeding units and shower trailers.

“If we can help that church become aware at the local level and do preparations ahead of time to minister in a time of disaster,” Bivins said, the state convention “can become a resource for that church.”

In California, 9/10 work has become increasingly necessary over the past decade as government agencies and the American Red Cross have decreased the frequency with which they call CSBC Disaster Relief for help with disasters, Bivins said. Though disasters continue to occur, an increasing number of faith-based organizations have begun to partner with the Red Cross in California, decreasing the volume of assistance requests some organizations receive.

Compounding the need for church-based disaster responses, government regulations have inhibited California Southern Baptists’ ability to share their faith with disaster victims during some government-related DR campaigns. DR work based in a local church and coordinated with local — rather than state or federal — officials, Bivins said, tends to open more doors for ministry and leave volunteers freer to address victims’ spiritual needs along with their physical needs.

Southern Baptist Convention DR leaders say the CSBC’s 9/10 work represents the cutting edge of what they hope will become an SBC-wide emphasis.

Sam Porter, director of Southern Baptist Disaster Relief (SBDR) for the North American Mission Board, said the California Convention “has reminded me about the importance of local church preparedness for disasters, and I’m seeking to emphasize that across the SBDR family.”

In Western states especially, SBDR leaders are waiting to see if an increased volume of 9/10 work can help Baptists adapt to the changing landscape of relief ministry and supplement traditional DR responses coordinated through Baptist state conventions.

A local church focus has helped DR work in the Northwest Baptist Convention. For the past five years, encouraging local churches to prepare for disasters has been a “focused emphasis” of the convention, said NWBC DR director Gary Floyd. Going forward, the convention plans to change its basic DR training module to include a local church focus. Additionally, all certified DR volunteers will be required to come from churches that have adopted a disaster preparedness plan.

“The heart of the Southern Baptist Disaster Relief model is the local church,” Floyd said, though “sometimes that’s more realized than others.”

When a snowstorm hit Oregon’s Cascade Mountains, a network of local churches that had prepared for a disaster was able to feed 500 people for three to four days in coordination with local emergency officials, Floyd said.

Advance preparation similarly helped fuel church-based relief ministry in Magalia, following the Camp Fire of 2018, Bivins said, noting no church is too small to make a difference when disaster strikes.

“A church may say, ‘We only have a small kitchen’” and “‘our fellowship hall will only seat 45 people,’” Bivins said. “But we can come alongside them … and help that church feed 500 people.”