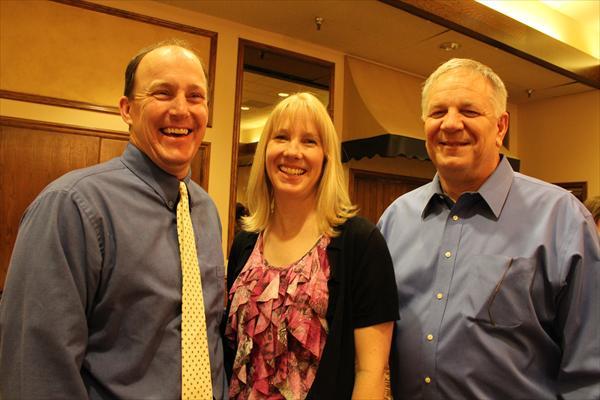 FRESNO —Montia Setzler, chairman of the California Southern Baptist Convention Executive Board, says he doesn’t think it is prudent for the Convention to jump on the 50/50 bandwagon related to division of Cooperative Program gifts between state Conventions and SBC.

In addressing the Board during its two-day spring meeting, May 9-10, Setzler said, “I don’t believe we need to cripple what we are doing with the primary assignment of reaching California by moving too fast. I would love to see us get to that 50/50.”

When the Executive Board meets in September, Setzler said members will see recommendations that are “reasonable and will move us forward with the intent of the task force of more money for planting churches and more money for international missions. I think there are ways to do that without dismantling our present structure. We need to find out how we can do this as we accomplish our assignment in California.”

Setzler noted “every aspect of Baptist life is wrestling with the money issue,” adding “We don”t need to figure out how we can be like all the other states…because the situation in each state is not the same.”

Setzler addressed the Board related to the report from the Focus 21 Task Force appointed in 2010 to study how California Southern Baptists can “more efficiently and effectively focus our efforts for the glory of God in fulfillment of the Great Commission.”

In 2012, the Executive Board tackled four of the seven recommendations leaving three – prioritizing global responsibilities, prioritizing church planting and denominational overlap – to be dealt with in 2013.

Setzler, pastor of Magnolia Avenue Baptist Church in Riverside, spent the majority of his address on the issue of prioritizing global responsibilities, which recommends there be a 50/50 split of CP receipts between the state and national conventions.

He noted the genius of Southern Baptist life in developing an “Acts 1:8 approach that distributes the responsibility among its agencies and entities.”

More than 70 years ago the state convention was founded as the The Southern Baptist General Convention of California and not the “World Baptist Convention, because we are located in California. It’s not that CSBC doesn’t care about Nicaragua, Canada or Mexico, it is that we have a primary assignment in California.”

Setzler added, “Southern Baptists have recently become enamored with the 50/50 split” which was recommended by the Southern Baptist Convention in 1925 when the Cooperative Program was founded. “Oh, and they came back a year later and said the way we can do this is by churches keeping 50 percent and sending 50 percent.”

“At whatever point California Southern Baptist churches start sending 50 percent of their gifts to CSBC as a general rule, we’ll have a problem because the (CSBC Executive Board) finance committee will be trying to find out what we do with all this money,” Setzler quipped.

He said the 30-40 year trend unfortunately isn’t in our favor. In fact, what we (Southern Baptists) are headed for is 1 or 2 percent of church budgets being allocated for CP.

“At this point, Setzler said, “CSBC doesn’t need to figure out how we can be like all the other state conventions.”

The situation in each state is different, he said, citing one Southern state Baptist convention that keeps about $12 million of its $20 million to reach an estimated 1 million unsaved residents. Setzler noted that Convention has “about $12” to spend in reaching each lost person in that state.

In looking at California, with $4.1 million in CP gifts for Executive Board ministries and 33 million lost Californians, Setzler noted CSBC has “just 12 cents” to spend in reaching each lost person in the state.

We don’t need to become provincial and look at CP gifts as California’s money and begin to hoard it…but our primary assignment is to reach California – the most lost state in America.”

“There is a belief by many,” Setzler added, “that if we move to a 50/50 arrangement in CP giving, many younger pastors will become excited and motivated about CP because more dollars are making it to the mission field. I get that and understand that. But, I don’t believe that is a true statistic since there already is a mechanism in place for a church to be able to send every dollar it wants directly to the mission field. It’s not a new idea. It’s called the Lottie Moon Christmas Offering.”

He said churches with a passion for international missions can support the IMB and its mission through Lottie Moon. Also, those with a passion for starting new churches and supporting the work of the North American Mission Board can do so through the Annie Armstrong Easter Offering. As well, he noted, those passionate about reaching California for Christ can support state missions by giving to the California Mission Offering.

Steve Pearson, leader of the CSBC business services group, said Lloyd is eager to see people come to a saving relationship with Jesus Christ and has a passion for the camp. I believe Barry possesses the skills to be an effective leader and mentor to camp staff.

Lloyd, who began his duties on May 10, replaces Rod Goodmon who served Jenness Park for more than 11 years, nine as camp director. Goodmon resigned in January to serve as administrator at Valley Baptist Church in Bakersfield.

Lloyd received a bachelor’s degree in physical science from California Baptist University in 1992. In 1999 he received a master’s degree in theology from Mennonite Brethren Biblical Seminary in Fresno. In addition to camp ministries, he has served as a teacher and an associate pastor.

He and his wife, Jennifer, have two daughters.

When asked about his vision for the camp, Lloyd said he felt strongly that “reaching the lost, equipping believers and restoring His servants is God’s vision for the camp. We were looking to grow the camp to 1,000 beds; we currently have 450 beds to fill. I’m beginning to look at JP as a really good solid camp to serve 450, and the county is helping me look at it that way because of the restrictions being placed on expansion. I have a vision of quality over quantity for the camp.”