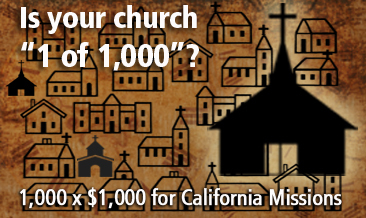 FRESNO – Now is the time for churches to begin thinking about the 2012 California Mission Offering, according to a California Southern Baptist Convention missions leader.

Mike McCullough, CSBC associate executive director, also announced that “Now is the Time!” is the theme selected for the 2012 prayer and giving emphasis.

He noted California Southern Baptists find “ourselves at a crossroads, and the need for CSBC congregations to pray for, to go and to give are at an all-time high.”

“The Great Commission in Acts 1:8 outlines reaching our ‘Jerusalem and Judea,’ and we believe that mandate begins here in California where we live and have the greatest impact on our friends, neighbors, families, coworkers and schoolmates.”

California is one of the “most lost areas” in the United States as well as the world, with as many as 33 million who don’t have a personal relationship with Jesus, McCullough noted.

“It is critical that we be like the Apostle Paul to be all things to all people in order that we might win some. I believe now is the time for California Southern Baptists to rise to the occasion of praying for and going and giving that we might impact California.”

McCullough said each year “only about 400 of the more than 2,100 CSBC congregations support the offering. In 2011, that number was less than 350, while giving was almost $400,000. We’d like to increase the number of churches participating in the offering.”

For many years, CSBC Executive Director Fermin A. Whittaker has had a dream of 1,000 congregations participating in the offering by giving at least $1,000 each. That would be $1 million for California missions, McCullough noted.

Of the approximately 330 congregations that participated in 2011, less than one-third, or only 93, gave $1,000 or more to the annual appeal, according to CSBC financial records.